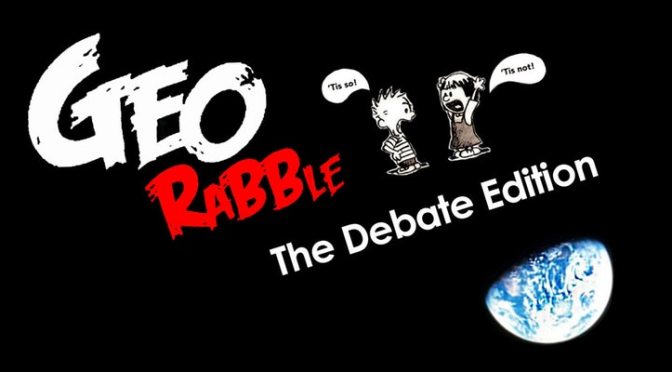 The Perth crew changed things up for GIS Day 2017 with GeoRabble Perth #20 – The Debate Edition.

The surprise for this one was that it was ‘everyone in’ – with full Rabble participation. After a few limbering ales to celebrate the Aussie win over Honduras in the World Cup Qualifier – MC Carly split us into a couple of teams to find out if:

It turns out we must have really enjoyed those drinks because we decided Big Brother still isn’t here yet, Proprietary really does beat Open Source, and On-Premises trumps Cloud!

Actually, it was all down to the quality of our teams and debate leaders of course. There were eloquent speeches that would have made Obama proud. Taking a lead from the world game – there were a few ‘own goals’ when we forgot which side we were on – especially when our MC had us switch sides at the last minute for the second debate. And there was, well, the Rabble.

A special thanks go out to MC Carly for keeping things (relatively) civil, special guest Rabbler – the Dark Spatial Lord – for being our resident disruptor, and to our Perth GeoRabble for getting into this one (and not running screaming from the bar).

A big thanks also goes to our sponsor of the night – NGIS – thank you for your support!

Maybe we’ll give this format another run sometime. Let us know if you’ve got a question you’d like the wisdom of GeoRabble to answer via perth@georabble.org or #georabbleper.

And stay tuned for news about our 21st GeoRabble Perth – coming early 2018.

In the meantime, if you’d like to get involved in GeoRabble organising, or would like to speak or sponsor, drop us a line through perth@georabble.org , or through twitter @georabble or #georabbleper.