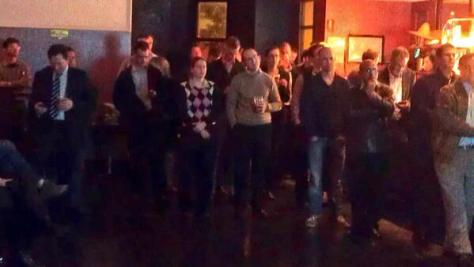 With a roll of the dice, the evening kicked off to an exciting start with speaker Kate Raynes-Goldie who brought the world of community game design to the GeoRabble stage. GeoRabblers got a glimpse into how location plays an important role in the construct of community games where play involves people gathering in locations or moving across them. Examples were given of “Gentrification” and Paparazzi; the latter of which was a GPS driven cat-and-mouse game of ambushes, paranoia and scandalous photos; drawing a link with the (perhaps) more familiar ‘game’ of geocaching. A “Community Games” workshop will be held at SpaceCubed in July, for those interested in learning about game design.

Next up on the GeoRabble mic was Erwin Vos, who delighted GeoRabble crowd with pretty pictures and anecdotes of jobs gone-past (including a stint as a sous-chef at the 2010 Vancouver Winter Olympics); with, of course, more onus on the pretty pictures! Passionate about imagery, Erwin describe the multitude of opportunities that exist for interpreting, analysing and using imagery; from detecting houses with poor insulation through to detecting land use change. The possibilities are limited only by the imagination (and knowledge of imagery components and techniques)!

The night’s mystery speaker was then (in dramatic drum rolling excitement) unveiled: Andy Waddington! Well, perhaps not in such dramatic fashion, but you get the idea. An experienced FIG/IHO Cat A Hydrographer (not sure what all those letters mean, but I’m sure they’re awe-inspiring!), Andy spoke about the charting of marine areas and sailed us through the methodologies carried out in the past (“There be dragons” was, once upon a time, a sufficient enough map indicator), those at present and those potentially used in the future. Andy also spoke about how charting now involves less dangerous voyages into areas to be charted (thanks to the power of spatial technologies such as lidar) but that in turn curtailing decisions had to made on aspects such how much area to survey or how much detail to capture. In the context of this, Andy stressed the importance of being able to know when to reuse data and gather as much information as possible from what was available.

Back on dry land, Liz Marjot was the next speaker of the night and spoke about a WA program called Spatial Technology in Schools (STIS). Liz described how the program came into being and the importance of spatial education for youth today. In particular, Liz spoke about how the interaction with spatial technology can spark interest and passion in geography and mapping, which oftentimes is lacking in a traditional classroom setting. Giving examples of some student projects, Liz described how powerful GIS can be in an applied setting in engaging students and encouraged us all to participate in bringing geospatial technology to the youth of today.

Leading on, Shane French spoke to GeoRabblers about the transition of a corporate GIS from a commercial software environment to an open source one; and gave an insightful and honest comparison of the similarities and differences, and the ups and downs encountered along the way (and did a great job of sticking to GeoRabble manifesto by not mentioning any product names!). It was a great overview for those pondering the change and implications it could have.

Last, but not, least GeoRabblers were treated to unique presentation by Hai Tran who spoke about drones and use of them to capture spatial data in a variety of contexts; from constructing aerial panoramic views of landmarks, to monitoring agricultural land, to capturing imagery to assist in the search for a missing Canadian bushwalker. Hai also spoke about the benefits of using drones: the low cost, the ease of deployment and processing; but also the diversity of use – how the drone’s payload can accommodate all sorts of devices for data capture. Though, for those enthusiasts out there, Hai did mention that being able to fly drones of this calibre did require a license (and permission from airport(s) to fly in certain areas).

Many thanks to GeoRabble team for organising the event, to the speakers of the night, to the great MC David Brady and to the event sponsors: AAM.

GeoRabble http://www.georabble.org happens in various locations around Australia, is free and open to anyone, but frequently sells out.  If you would like to talk at a future Perth GeoRabble event, please send an email with the title and a short description to perth@georabble.org.